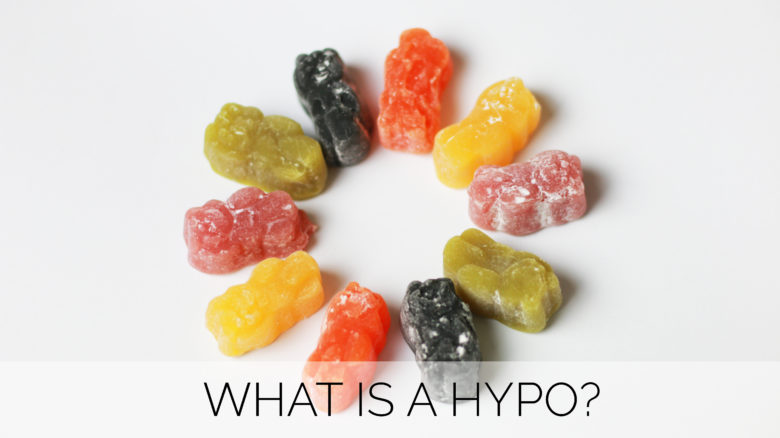 So we already know the pancreas is a bit dodgy in most CFers. But over the years, I’ve developed something called Hypoglycaemia.

There are two types of hypos you can get, the first is from Diabetes where I believe some medication can lower the blood sugar below normal. However, my hypos are not because of diabetes (yet) but because my pancreas is a bit of a slow coach, pretty much like me at sports day.

I have something called Reactive Hypoglycaemia which means it happens after I eat. Let me break it down.

We need food to give us energy, obviously. When carbohydrates are digested in the stomach they are broken down into a type of sugar called glucose. This is then absorbed by the stomach and small intestine, into the bloodstream. Now there’s some very clever cells in the pancreas which are sensitive to the amount of glucose in the bloodstream, (called the beta cells for anyone sciencey) which triggers insulin. These clever little cells check the blood glucose level every few seconds to determine whether to release any insulin from the pancreas.

So in short, insulin stops the glucose level in your blood from getting too high.

After the glucose is absorbed into the bloodstream, the pancreas releases insulin which travels through the bloodstream, along with the glucose, right up to the cell doors. The insulin has a magical key to open these doors, allowing the glucose to rush in and be converted into energy either immediately or stored for later use.

That’s how it should roll.

So how does my reactive hypo work?

Well young Padawan, it seems that after I eat something rich in carbohydrate, my blood glucose level rises but my pancreas is slow to release insulin. It’s like the pancreas is having a nap but keeps pressing snooze on the alarm until 1-2 hours later…(sounds familiar Kate…)

By this point the glucose in my blood has already started to decline, so when the pancreas finally wakes up and decides to release insulin, it does too much, too quickly. Therefore the blood sugar goes way below normal.

Normal is situated between 4.0 and 8.0. The levels can be measured on a small handy device. You prick your finger so a spot of blood appears, then by placing it on a clever strip of paper, the device reads how much sugar is in the blood. Anything below 4.0 is hypoglycaemia and anything above 8 is hyperglycaemia!

To tell you the truth, it seems no-one is quite sure as to why people with reactive hypos have a slow release of insulin, but it does indicate that the pancreas is not working properly. In some cases with CFers, this eventually turns into CF related diabetes. There’s always something eh!

Alright, alright, I hear you! Enough of the science crap! Let’s talk symptoms. When the blood sugar levels drop too low, I personally feel light headed and weak, then my hands start to shake, then I start to sweat like a mother flippin english tourist in the middle of the Mediterranean. Whatever the weather. Anyway, I can also get hungry, really hungry. I’m not even kidding with this one. There was one time I ate a bowl of leftover pasta, half a sandwich, a banana, and a pack of Jaffa Cakes before I came to my senses…(was that the low blood sugars or just my hungry belly talking? I guess we’ll never know…)

If you don’t treat the hypo, then yes, you can become unconscious… and death will occur. *dramatic intake of breath*. Well maybe only in extreme circumstances. But that’s nothing to worry about. Because I know just how to treat it.

The answer is simple. Jelly Babies. They are the crème de la crème of sorting hypos out!  They are magical pouches of sugar that absorb super quick into the blood stream to give those low blood sugars a kick up the bum. The nurse recommends five should be enough, but if you’re anything like me, then I always take a few extra, you know, just in case…purely for medicinal reasons…of course.

Now you may be thinking that I go through a lot of packets of Jelly Babies and you would be 100% correct. Which is why I always know at least one of my Christmas/birthday presents! (If I get two packets then I know they were on offer! Applause all round!)

What’s that? You don’t like Jelly Babies? Well my friend, anything that quickly absorbs sugar into the bloodstream is still validated too. Sugary drinks are excellent, or you can buy Glucose tablets from the Chemist. When the blood sugar level rises back above 4, it is imperative to have a long acting starchy carb, like a sandwich or a few biscuits to even out the sugars again.

Basically as you eat, your blood sugars go up and down but when you’re not eating and your blood sugar starts to fall, the alpha cells in the pancreas release a hormone called glucagon which sends a signal to the liver to release glucose to make the blood sugar balance out. Clever thing. BUT when that runs out, the blood sugar dips,(hypo time!) and then eventually when it’s back to normal the liver wants to reclaim some of the glucose that was stolen earlier, and if you haven’t eaten enough it can sometimes make it dip later on. You still with me?

Side-note- it is suspected that those pesky alpha cells in the pancreas are also not working as they should in us CFers. Typical!

Now there is no defined way to prevent a hypo, it works different for everyone but it’s common knowledge to eat something with a low glycaemic index. I’m saying some big words here I know, but bare with me! A food or drink containing carbohydrates can be measured by how quickly it is absorbed by the body, through the glycaemic index (GI).

If a food/drink containing carbs are broken down and absorbed into the blood stream quickly, then it has a high GI and if it happens slowly, it has a low GI. Pretty straight forward right? Although the GI is actually based on chemical structure and is not reliant on the amount of carbs in the food, so it can be a bit confusing!

The GI can tell how quickly a food can raise the blood sugar only when eaten on it’s own. So by combining foods together it can level out the blood sugars. A good example is: a jacket potato has a high GI, but baked beans has a low GI and if you add a smattering of cheese (which doesn’t contain carbs but is high in fat) then it all works together to bring down the GI of the meal. Yippee!

I have a list that the dietician gave to me of foods with a low, moderate and high GI, so I know the deathly hypo-creating foods to the not so bad ones. Technically you should be able to follow the list and be fine but I’m not so sure it works. Like I say it’s different for everyone. 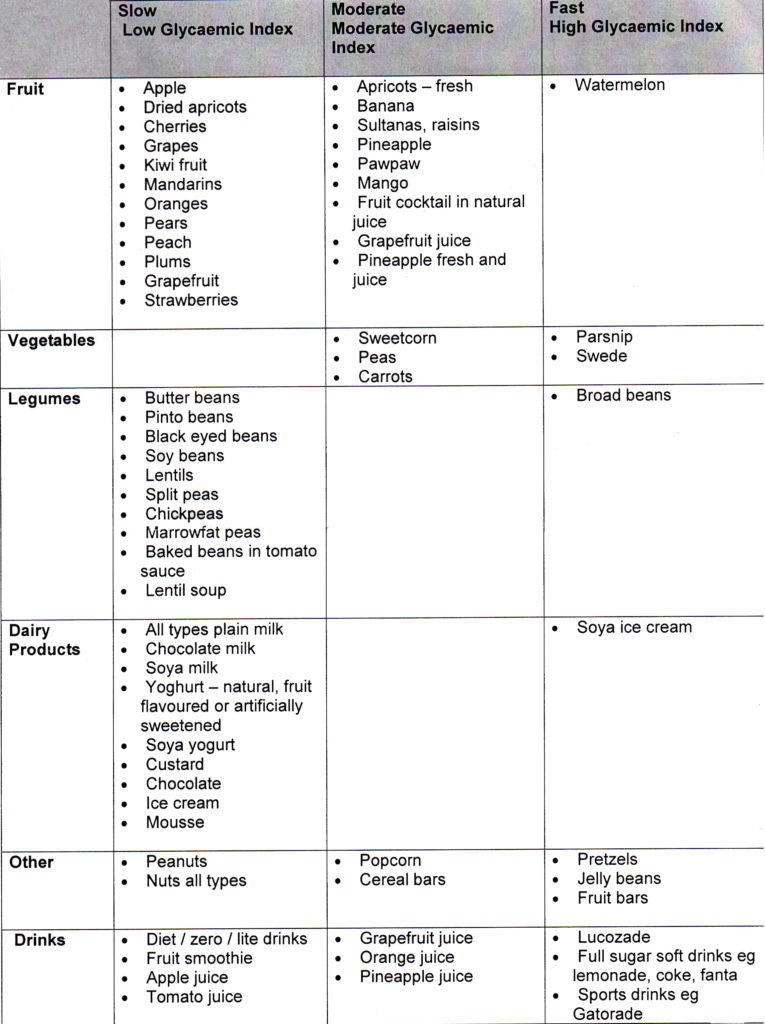 The top tip in attempting to prevent a hypo is to eat something with a low GI, for example oats, porridge for breakfast.  The next tip is to eat something fatty with it. If it’s cereal then use full fat milk, because I am told that a high fat content is a way to slow down a hypo. I’m not a fan of full fat milk so I tend to use a handful of mixed nuts or pumpkin seeds.

When I was on a health kick, I started having smoothies for breakfast but quickly found that it was a no go! All of the natural sugars in the blended drink, caused the blood sugar level to rise super quick and fall super fast. Perhaps I will revisit this idea with oats and nuts added in… hmm, it’s certainly food for thought…

Anyway the only other way to possibly prevent a hypo is by eating snacks regularly. So roughly one hour after breakfast, stuff your face with a banana, or a granola! The only problem I find here is that I’m not hungry that soon after breakkie. But it’s supposed to help reduce the hypos.

Say, what about Alcohol? Alcohol can make the blood sugars fall in everyone but mine might fall just a bit lower and sometimes the symptoms are similar to being drunk. So it’s all the more important to eat something before hand. If I don’t, then it’s important to do so before sleeping, otherwise I could have a hypo in the night or feel terrible in the morning. It certainly explains why I was craving carbs when I woke on New Years Day. No word of a lie, I ate 5 sandwiches before 3pm. #NoRegrets

For me, the hypos have got progressively worse. I remember distinctly being in an A Level Photography class, when I started to feel shaky, weak and hungry. The hunger wasn’t a big shock, but the way the shakes kicked in certainly was. I had no idea then that it was a hypo and I would be receiving Jelly Babies for the rest of my Christmases/birthdays!

I’ve definitely become more adept at noticing when a hypo is about to strike.  I get the early warning signs and I don’t hesitate now in reaching for those delicious sweets.  But I used to think that it was all in my head, that I was fine and I wasn’t really feeling anything…till the weakness, shakes and sweating kicked in! Only then did I have a real DOH! moment.

I don’t know about you, but I’ve actually learnt an awful lot about Hypoglycaemia whilst researching for this post. It might not be of interest to everyone but I hope it’s shed some understanding on a matter that’s still not fully understood by the professionals. Who’d have thought I would be prescribed sugary sweets! Personally I think Jelly Babies should be put on my repeat prescription, but there you go…

4 thoughts on What Is A Hypo?