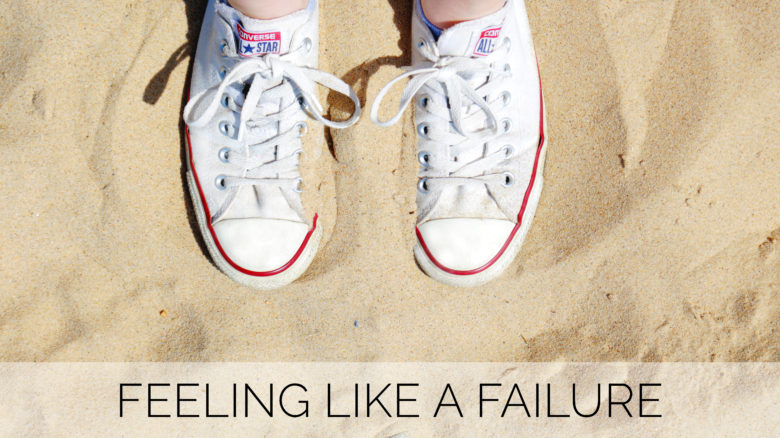 So it’s August. And today I wanted to talk about something which has weighed heavily on my mind for the last few weeks. Being a Failure.

Feeling like you’ve failed at something is totally rubbish. Because it sucks out any hope you have left.

So what exactly have I ‘failed’ at? Basically, in a nut shell, I haven’t found a job. Even though I set myself a deadline of getting a new job by March. I’ll say it again louder for the people in the back… it’s AUGUST.

It’s not like I haven’t tried, I look every single day… I have the Reed and Indeed app on my phone. But scrolling endlessly through Indeed is literally soul destroying.

Don’t get me wrong, I love my dogs and the clients I have, but it’s time for something different. Something that is going to propel me into a job that I was born to do.

Since January, I’ve found precisely two jobs which I thought I could do. One of which I didn’t get. And the other is pending, meaning I still haven’t had a solid answer back from them yet. But even if I did get that one, I couldn’t quit my job because I’d be making less than I am on now!! I’ve also asked video production companies if I can VOLUNTEER, even if it’s just making cups of tea, but to no success.

I have started to get asked about dog walking jobs for September/October/ November, and it literally breaks me apart. I get so frustrated at myself that I’m not moving forward in my career, which leads back to feeling like I’ve failed.

And of course, when I feel like this, then everything spirals out of control and suddenly I’ve failed at everything…for example *clears throat* …I haven’t blogged in over a month, I haven’t uploaded a video in over a month, I haven’t read any books this year, I haven’t begun on the second draft of my novel yet, I still live at home, why can’t I move out yet, oh yeah that’s right, because you need a new job… and the list continues.

Then once I start thinking like that, I start to panic and stress out, and of course it gets me frustrated and then it’s a whole endless circle.  Which always ends up with my crying down the phone to my boyfriend… sorry Tom.

Now I know that the job I’m after is specific. Video editor, video assistant, video intern… etc but it seems that unless I have 100 years experiences, or have a degree, or I’m proficient in Premiere Pro (an editing software, I use Final Cut Pro for context) then I don’t have much of a chance. However if I am willing to commute to London every day then I have so many video job choices!!

Do it Kate! Commute to London! Loads of people do everyday!

I’ve thought about it. For a milli second. But I always come to the strong and persuasive conclusion, that is: I hate London. The crowds of people, the stuffy tubes, the air pollution. Not to mention the cost of travelling there and back everyday. I reckon it would cream cracker me out.

At one point in the last couple of weeks, I seriously considered just going back into retail. It would mean a stable income, and I’d earn more than what I’m on at the moment. I’d be able to actually save money, instead of depleting my savings. But just looking at those kinds of jobs felt like a massive step backwards. And the frustration circle starts again…

A few people I know will just get any job because it pays well. I’ve never latched onto that way of thinking, instead I believe that I have a passion and that is what should drive my career choice. Not money. Which is why I felt miserable just looking at retail jobs because even though it would mean more money, it’s not what I want to do.

The famous speech of Alan Watts always speaks words of wisdom. If you haven’t heard the speech, I urge you to watch the video below. But here is a rough section of what he says:

“What would you do if money were no object? How would you really enjoy spending your life?…When we finally get down to something in which the individual really wants to do, I say, you do that. And forget the money.

Because if you say that getting the money is the most important thing, then you will spend your life completely wasting your time. You’ll be doing things you don’t like doing in order to go on living, that is, to go on doing things you don’t like doing. Which is stupid. It’s better to have a short life that is full of what you like doing, than a long life spent in a miserable way. And after all if you do really like what you’re doing, no matter what it is, you can eventually become a master of it. And then you’ll be able to get a good fee for what it is…”

Previously when I worked in an office, I felt unbelievably out of place. It clearly wasn’t where I was meant to be. I made more money in a week there, than I think I ever have in any other job! But I came home in tears every day, hating everything about it.  It was like trying to fit my size 6 feet into a size 2 shoe.  It just wasn’t the right job for me.

I know that by writing this blog and by creating the YouTube videos/small promo videos it means I am beginning to build up a portfolio of what I can do. And I constantly wonder whether instead of looking for a job, I should create my own job. Start up a small business, edit peoples holiday videos or film their birthday parties.  Because quite frankly I’m sick of waiting for the job to come to me.  Perhaps I should just go out there and grab it myself. Create my own opportunities. I remember hearing this quote somewhere and I can’t help but think of it every time I look for a job…

If you don’t build your own dreams, you’ll end up helping someone else build theirs…

I’d love to hear your thoughts and feedback, so please drop a comment below or message me on any of my socials.

‘I’m not a failure if I don’t make it, I’m a success because I tried’… which is one of those quotes you’d read in a self help book! Cheesy but it has the right notion of positivity.

So after weeks and weeks of feeling like I’ve failed, I came to the realisation, that I haven’t failed.  And this is simply because I’m still trying.  I haven’t given up, and nor will I.  One of my biggest goals in life is to be in a job which I am truly passionate about and also which I enjoy doing.  And I have no doubt that I will eventually get there.  But for now I’ve learnt that failure is just part of the journey.