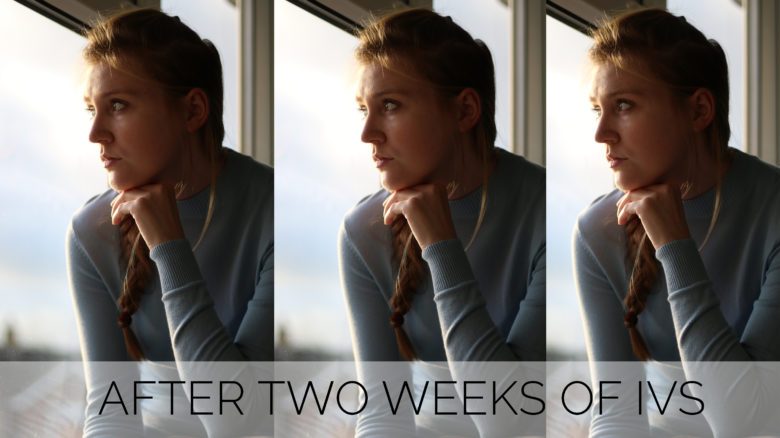 For the last two weeks I’ve been on IVs, and yesterday I finally finished. It’s strange when you’re on them because time travels so slowly but so quickly at the same time. I certainly won’t miss them nor will I miss wrapping my arm in cling film for showers!

I don’t mind making them up because you feel like a proper medical professional but by day 8 I was pretty fed up. I can’t stand pushing them through and feeling the cold liquid rush up my arm. It makes me feel queasy and uncomfortable.

I’m proud of myself for creating two videos in the spare time I had because it’s something that I really enjoy doing, and not only that but it gives me something to focus on other than IVs.

When I first went in to the emergency clinic, my lung function had dropped to the lowest it’s been in adult clinic, which is 65%. I knew something wasn’t quite right so I didn’t expect it to be above 70. But once I saw the number, I knew I’d be on IVs. And I was right, it was decided that IVs should be given to boost me back up to my normal lung function which is usually 76-80%.

After one week of IVs, they had shot up to 75% which was okay. But yesterday, even though I gave it my best shot, it had dropped to 72%.

I felt so gutted. So disappointed. I worked excruciatingly hard to keep my emotions at arms length so they wouldn’t give me away in front of the nurse. I felt let down. After two weeks of doing IVs three times a day, they had not gone back to ‘normal’ nor had they stayed the same as the previous week. Sure, it had eradicated the chesty cough, but that was it. It was frustrating. But most of all it demonstrates that IVs don’t always work 100% of the time. I know in my latest video I said that they help you get back to feeling normal but sometimes they don’t quite get there.

I’ve had this once before, when being on IVs for two weeks didn’t lift the lung function back to where it normally was. Back then I blamed the new drug that I’d never tried but this time it doesn’t make sense. Back in January when I had IVs, I was on the exact same drugs I was on this time and after a week my lung functions flew up to 83% which continued to stay there till I finished my course.

And before I get people saying that 72% is still good, I know it’s not dreadful, but it sure feels like my body has let me down. Instead of running out the hospital screaming “I’m Free!!” I walked out with a heavy heart and a whole heap of emotions.

I think it’s okay to feel like this after not getting the results you want. It’s okay to be frustrated and upset about it because it gives you the determination to do something about it. Instead of burying myself in emotions, I can use these feelings to fuel motivation to exercise more, use my Acapella, do breathing techniques and percussion. And not just say these things like “yeah I’m totally motivated now” and do it for a few weeks then stop, but actually get into a routine because routine is key. I’m going to set reminders on my phone, set an alarm for certain times, and even schedule in workouts on Pactster. Pactster is such an incredible resource as they do online videos for us CFers (and it’s totally free for CFers in the UK) so why not make the most of it?

Today I made a start, and did 13 minutes on the treadmill (with inhaling Dnase before hand) which was enough. Next Friday I’m in the Lake District, so there will be plenty of hiking happening. Lungs you better be ready for a workout!

We can all have clinic appointments that get us down but at the end of the day it’s just a snapshot of what your lungs are doing. There could be loads of reasons that it wasn’t quite as good as you hoped. Maybe your weight has dropped, maybe it’s a reaction to the cold weather, maybe it’s lack of exercise, maybe it’s something you’ve picked up from the environment or somebody or maybe it’s because of a certain drug you’ve stopped recently.

In the end, we must do everything in our power to improve . Are you doing every single thing you can possibly do to maintain your health? If the answer is no then what the heck are you waiting for? Getting on top of your health is the most important thing you can do. I ain’t trying to preach here, but its the damn truth.

I need to shut up now and do my second lot of Dnase and acapella. There’s always room for improvement, so do everything in your power to make that improvement happen.

One thought on After Two Weeks Of IVs