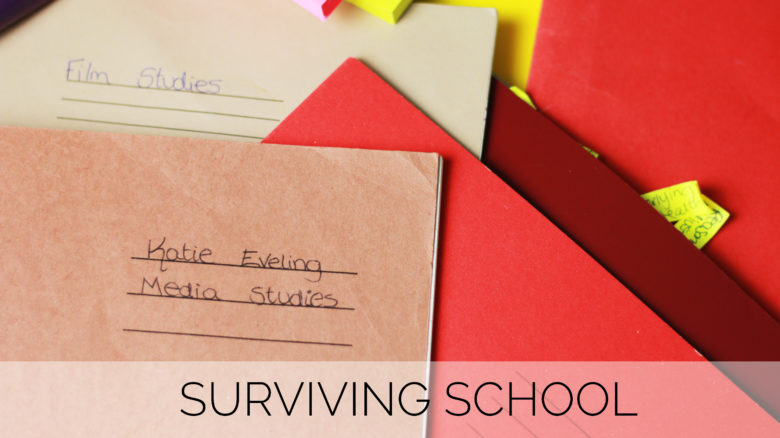 Remember the good old days of school?  The days of passing notes to each other in class, or trying to find the online games that weren’t blocked… The days of messing around but never getting told off because you were known as the quiet one…

But alas, it was probably one of the toughest hurdles I got through.  Living with CF made it quite a bit harder.  Don’t get me wrong, primary school was a hoot! A handful of my friends knew about the condition, although I don’t recall ever telling them.  But it didn’t matter, because being that age I didn’t give two hula hoops about other people’s opinions.  I used to make jokes about taking the Creon or even ducking behind my lunchbox, when the school nurse came to give me my pills.  Everyone on the table was in on it, they would look out for her coming up the corridor. When she eventually did, they’d give me the warning and I’d duck behind my lunchbox.  Everyone laughed when she took forever to try and find me.  I was so cool…

It all changed when I got to secondary school.  The vast amount of people was overwhelming.  I was always a shy person to begin with but this time I seemed to shrink back even more!  So when I transitioned into a much larger school, I was presented with a mass of people who obviously did not know about CF, and I had no idea how to tell them.  I couldn’t just go up to them on the first day and say, ‘hey guys, I’m Kate and I’ve got CF, how are you?’  And so with every day that passed it became more and more difficult to tell people.  It really didn’t help when the bullying kicked in.  I was called ‘plastic girl’ by a boy because he saw me taking a few pills.  Then a couple of others joined in taking the piss until one of them eventually turned round one day and asked if the reason I was off school so much was because of cancer.  I guess I should’ve turned around and said “it’s Cystic Fibrosis actually, so shove that up your arse and eat it!” … That’s certainly one way to tell people!  But being such a timid person anyway, I certainly didn’t have the courage to do that then.

Aside from the kids bullying me, I also had the same problem with a teacher.  Only once. But enough to make me remember it.  He said, in front of the whole class, that “the homework was due in next week…unless you’re Kate and decide to be ill on that day.”  Everyone laughed and looked at me.  It was humiliating.  This particular teacher even knew I had CF.  What a (insert extremely strong word here).  I said nothing.  What I should’ve said was something along the lines of, ‘Oh I’m so sorry that I have a chronic illness that’s classed as ‘life limiting’ and I have to priorities my health over your crappy homework,  but that’s just the way it is you stupid, brainless, two-legged, four eyed bag of sh*t.’  Oh that feels so good to get off my chest (pun intended).  But instead I went to the library, hid in a corner and let a few tears out.

I missed a lot of school, because even getting just a simple cold, knocked me out for a week or so.  I also had clinic appointments every two or three months, so sometimes I’d have half days and miss the last few lessons.  When I was admitted into hospital for two weeks, there was an awful lot of work to catch up on.  Sure, they used to send work home for me to do, but missing the lessons meant it was harder to understand what I was meant to do!

When I finally did go back, I always got asked the same awkward question, where were you? I’d sometimes say (for a joke) I went to Australia.  One guy actually believed it, which was fun for a week till the novelty wore off.

My parents even got a letter sent home stating that my attendance was ‘causing concern’ and it was below average.  Funnily enough, I was in hospital at the time! HA! My mum certainly had a few things to say about that! I found her response the other day and she took that deputy head down!

Anyway.  Over my years at school, I made some really good friends.  But somehow telling them that I had this condition was never an option.  I was so obsessively worried that I would lose them that they might think I was contagious or even that they’d look at me and/or treat me differently.  Because for the first time in my life, when I was at school, I felt ‘normal’.  When I left the house in the morning I left the CF part of me behind too.  And I became just an average person.  Ah! But what about eating lunch in front of everyone I hear you cry!?  Well I quickly became the new expert in sneaking the pills in without anyone noticing.  Sometimes I would even take the pills at the end of class before lunch, so I didn’t have to do it in front of everyone. Although on some occasions I got myself so paranoid and worked up that everyone was watching me that I just didn’t take them.  Not advised.  I certainly paid for it later on.

As I’ve mentioned in ‘What it means to live with CF’, coughing is a huge part of being a CFer.  So when you’re in the middle of class (or exams) and it’s silent, it’s not easy to hide.  I hated the non-stop tickly cough which is constant and never seems to flippin end!  Then there are the chesty coughs which sounds like you’ve been smoking for 50 years.  If I ever did this cough around one specific person, he’d lean away from me and say ‘ewww!’ like I really was contagious! Which y’know, didn’t help with things.  But to be fair, he didn’t know about CF, and if he did I would like to believe that he’d understand…

You see, Cystic Fibrosis is called an invisible illness, for a very good reason.  Because just looking at me you would not be able to tell that I have it.  It’s both a blessing and a curse.

Most people have a tough time at school, so it’s really the way you deal with things.  I wish I could tell you I got over my fear before school ended but unfortunately I never trespassed out of my comfort zone.  Like I said, school started to become the only place where I could forget I had CF (to an extent) and try fit in with the rest.  A part of me wonders how different it would’ve been if I had just been honest.  I can just imagine how much less of burden that would’ve been if I had just done that to begin with.  As in the words of JK Rowling, numbing the pain for a while will only make it worse for when you finally feel it.  So. True.  It was great to pretend not to have CF at school but when the reality hits later on, it’s insufferable.

If you can relate and you’re super worried about how your friends will react, they might really surprise you and they probably won’t react how you imagine them to.  They could become even closer to you than before.  They’ll understand your coughing, and pill taking, and they’ll probably become as used to it as you are.  And if they don’t? The people who turn their backs on you because of a condition are certainly not the people you want to keep in your life.  They are just low. And idiots. The people who make you feel upset, or alone are not worth your time.  Trust me. Cut them out.

I’ve learnt from my mistakes.  It all comes down to standing up for who you really are (as cheesy as that sounds) and not hide behind a lie.  And if you are sitting there saying, ‘it’s easier said than done’ then I know EXACTLY how you feel.  But the truth is once you’ve been honest it’s absolutely worth it.   No more feeling embarrassed when you cough, no more feeling out of place when you can’t finish a rounder’s match because you’re out of breathe, no more lying to your friends.  The good ones kinda deserve to know.  And no more making up excuses as to why you were off sick.  The amount of agro I went through stuck with me for years.  However it has shaped me into the person I am today.

At school and in life, you have to go through a lot of crap, forcing you to become mature at a young age and also braver and stronger than possibly most people in your class.

Be unapologetically you, and people will see just how awesome you really are.  Don’t think for one second that you are alone in this because us CFers are a team to be proud of.