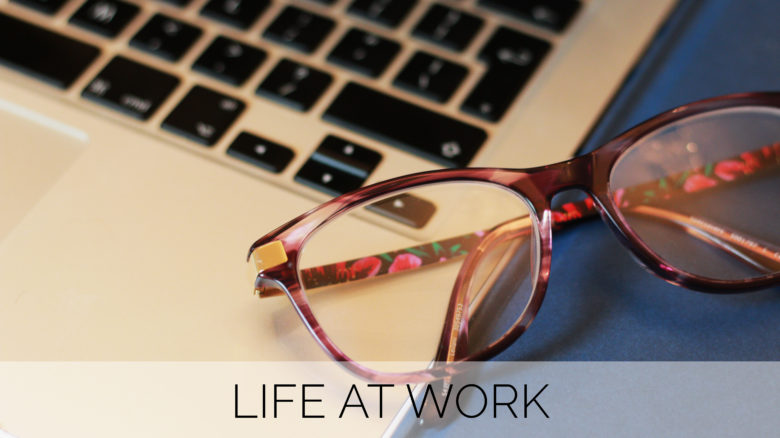 I’ve had a few interesting experiences with being at work and living with CF, so I thought I’d share some of them below.  Some will undoubtedly make you shake your fists at the screen, because it sure has made me do just that by reliving it!

I left school with reasonable A-Level and GCSE results, but I didn’t have a clue what I wanted to do.  What I did know is I did not want to study anymore.  So I applied for a job at a high-end retail shop. I’m probably not allowed to say the name for legal reasons or something, but if I say it rhymes with Sparks and Fencers, you’ll probably get it.  In my interview, I told the lady about CF and how I’d potentially have days off ill, in hospital etc.  She assured me that it wouldn’t be a problem.  When I had my next interview, with a different lady, she had no idea about it.

I was offered a position at a brand new store, as a temp, from November till March. I still hadn’t quite got the hang of telling people about CF yet, but I made a great bunch of friends there.  At the beginning of Feb, I got shot down by a simple cold.  When I came back to work, a manager filled in a form about said cold.  I mentioned again about CF to a completely clueless manager, who had no idea I had it, what it was, and apparently how to spell it (Cystic Fibrsais).  I shrugged it off.

A few weeks later, the company started to inform us who were staying and who were leaving.  I found out via email that I was going.  I thought it was strange because I had never messed around or caused any trouble.  So out of curiosity I asked my line manager why, and the reason given was down to ‘poor attendance’.  I had four days off sick… Four days!  That’s pretty good for me!
I had a moment of: Excuse me line manager but you reassured me that, should I become ill, it wouldn’t be an issue…

But at the end of the day, when it comes to attendance, they only wanted the best.  Seems a bit unfair for something I can’t help having.  Is it me or does that sound a little like discrimination…

I put up a fight, wrote a letter to the store manager, and eventually had a meeting with her a month or so later.  It never fully got resolved.  A month after that, they offered me another part-time temp job.  Which I took.  Of course I had a couple of sick days here and there until I was sent a letter stating I had a ‘Formal hearing’ based around my attendance.  Well I was pretty peeved, so I prepared my case as though I was going into court… Seriously. I printed off the whole 33 pages of their ‘attendance at work policy’ (using their printers of course).  I went through every single page, and highlighted everything that applied to me.  I even put it in a folder with the most recent letter from the hospital and a leaflet about ‘The Facts’ from the CF trust.  I don’t think I have ever been more prepared for anything! I actually used post it notes to tab the relevant pages.  I mean, I did this like a true BOSS!

The lady who did my hearing was so shocked.  I gave her ‘The Facts’ leaflet to keep. It’s safe to say I won that battle.  It shouldn’t have been a battle that I had to go through in the first place.  But hey.  Such is life.

When my contract came to an end, I was let go. Kinda had enough anyway.

I did a couple of temp jobs after that.  One of which was for an estate agency.  Whilst I was in the interview, I was being very honest about CF talking about becoming ill easily and needing time off and hospitalisation etc etc. To which this woman replied with, “That’s not ideal really…” It kind of shocked me.  Like I’m sorry, it’s not ideal for you? For you?! Are you kidding me…? What a thing to say… I took the job however, but after three days I caught a cold from the person opposite (which lasted for 3 weeks. Thanks). I left after the fourth day.  I couldn’t stand it.  I went up to the woman and said I didn’t think it was the right job.  I even managed to sneak back her own words and say “I know it’s not ideal”…

I knew I couldn’t stand office work, so I went back into retail, but with a different company.  They asked if there were any special requirements that they could do to help with my condition.  I said to avoid dusty places.  They put me in the stockroom, where, every day I would leave with my hands black.  I didn’t accept their extended job offer.

At this point I was so tired of people, I wanted something completely different.  After looking on Indeed for the millionth time, I saw exactly what I was looking for.  A dog walking job. I read the description and knew instantly that I wanted this job more than any other I’d applied for.  I can honestly tell you I have never updated my CV so fast and sent it off.  I met with the business owner a week later and we had chat about the job, and CF.  For the first time, an employer had actually read the medical note on my CV explaining about CF.  No-one had ever done that before! Honestly, every interview would go like this:

But not this woman! We had a very open and honest conversation about it and I got the job.

Dog walking has been the best job so far.  When I read the job description, the first thing that went through my head was, the physiotherapist would be so proud!   Well folks, impressed she was… although I think she would be more impressed if I did my Acapella everyday…

When I told the Doctor about my job, there was an awkward pause before he suggested that we needed to make 100% sure that I’m not allergic to animals…which was a tense few weeks! But all was well, thank goodness! Although I do find that long-haired dogs, make me wheeze and cough more.

But overall it is great exercise and fresh air!  Plus you are primarily working with dogs.  And they’ve never had a problem with my attendance, or have taken me to a ‘formal hearing’.  They are so happy to see me when I walk in which, whatever mood I’m in, always makes me smile.

Recently I was admitted into hospital for IVs and only then did I feel it was necessary to tell the customers about CF.  They were all very understanding, and it occurred to me that I probably should’ve told them sooner so they know that if I become ill, even with a cold, it’ll take longer to bounce back.  I am so lucky to be in a team of amazing dog walkers who can cover for me if I need a couple of days off.  I don’t know if they know just how much I appreciate it!

Being a dog walker means that I am self-employed which is perfect for me.  I can tailor what jobs I take on based on my health.  I mainly work part-time, but even then, I’m pretty knackered! Recently I had a full day starting at 8am and finishing around 4.30pm…I’m still recovering 3 days later… #CFLife

However, the down side to being self-employed and part-time is the money. Of course when you’re self-employed, if you don’t work, you don’t get paid.  So when I’m off, money becomes tight.    I’ve wanted to move out and buy my own place for a long time, but at the moment it’s just not financially possible.  But somehow seeing those wagging tails everyday makes every penny worth it.

My dream job is to become an author (I’ve just finished the first draft of my novel! EEEK!) Or create and edit videos!  What’s your dream job? Let me know in the comments!

I’ve come to accept the fact that I’ll always get some sort of hassle when it comes to work and CF. One interviewer told me it would be an inconvenience if I was off during busy periods… Even though I’ve had these sorts of comments thrown my way, I’ve never deterred from telling an employer about CF.   After all the most important thing is to be honest with them.  Communication is key!

I know that working full-time affects my health and I’ve had to make the conscious decision to choose health over money.  But when it comes to work, you need to put your health first. I know some CFers can manage a full-time job which is awesome but if you can’t then that’s ok too.  You are priority number one.