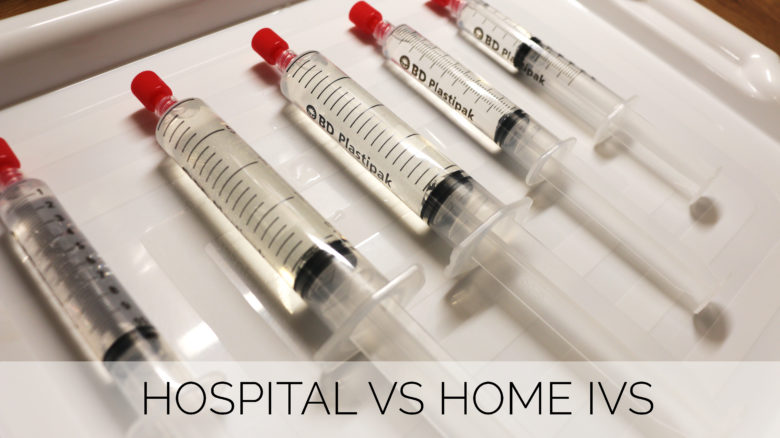 Have you ever thought that having IVS were like a SWAT team going into the veins to take out the bad guys (bugs)?

Command: Listen up all teams, we have a hostile situation in the lungs and your mission is to eliminate them.  Use all appropriate force of action. Is everyone clear? Ok all teams go, go, go!

(The drug is slowly administered)

Alpha team: About to enter the upper left lung…we have movement up ahead… permission to engage with the target?

Command: Backup’s not till 3pm.  They’re currently being debriefed in the staging area. Hold your positions.

Did anyone else read that in a bad American accent?  Either I have too much time on my hands, or I’ve watched too many action series (*ahem* 24)

Anyway, moving on.  If you’re new to what IVs are, then they are more commonly known as Intravenous antibiotics which means directly pushing through liquid medication into the veins.  Nah it’s not like some druggies who put needles right into the skin. There are devices that transfer the drugs safely. There are cannulas, long lines, PICC lines, Portacath and probably many more (but those are the ones I know about).  They are all very different but essentially do the same job.

Personally I normally have a long line, which is a small tube that’s inserted into the crook of the arm and goes up the vein…nice.  At the moment I am currently on IVs so I felt it was appropriate to write the difference between hospital and home IVs and which one is better (in my experience).

You might be thinking that Home IVs will surely be the better option.  But let’s start with positives, (because yes there are positives) of doing IVs in hospital.

First up, the most likely reason you are in hospital is because you have an infection that won’t budge.  Therefore you’re probably feeling, to put it lightly, crap.  So to have a nurse come in with the IVs already made up and ready to go can be a relief.  They can even administer it.  This is particularly helpful when it’s 6am and there’s no way you’re awake enough to push through a whole batch of syringes.  That’s certainly a benefit.

The next positive is you are monitored every single day.  They do your SATS, temperature, and blood pressure. If you start having a reaction to a drug then they have all the resources to help you. For example, I was experiencing some hard core nausea from one of the drugs and because I was at home, I had to call the hospital, phone the GP, call back the hospital and eventually pick up some medication at my local chemist.  Flippin’ nightmare!

They can also monitor drug levels by doing a couple of blood tests.  This is a huge advantage especially if you live over an hour away from the hospital and you have to rush up there first thing.  If anything is wrong they can sort it out quicker. Which leads onto my next point…

When staying in hospital you see a doctor almost every day.  Which is good, I suppose, because they check on your progress and suggest if anything needs to change.  Also you get proper physiotherapy twice a day (no excuses) to help shift the mucus. Fun.  But of course beneficial. Being a CFer means you get your own room because of cross infection between other CFers.  The hospital that I attend, has its own little en suite, mini fridge as well as a huge TV with DVD player and Wii console! They probably have an Xbox and PS4 too.  There’s a collection of DVDs and games to choose from too.  Whatever passes the time… AM I RIGHT!

Also because of cross infection, the nurses bring in all your meals and drinks.  You get a choice at breakfast, lunch, and dinner.  Even if you get hungry between meals then they can cook something up! What a team!  Alternatively you can get a free pass to the restaurant. And you can stack up the mini fridge too (including mini wine bottles) I mean, that’s got to be a positive right!? 😉

So not only can you pig out on food, but the room is cleaned every single day, including a fresh and made bed.  I mean, they might as well put a little choccie on the pillow.  I know I wouldn’t complain.  And because it’s so clean, I have never seen ANY spiders or bugs.  A major bonus for the people who are bug and spider phobic…AKA me.

But of course the BEST thing about staying in hospital is the beds.  No, they don’t come with memory foam and a 15 tog duvet, BUT they do move up and down.  So if you want to sit up in bed then just press a button and whooooosh! The top half of the bed moves up.  I feel like the laziest person in the world but it’s so worth it.  Everyone who visits will also love this feature, quite often you will get turfed out of bed by said visitor so they can have fun messing around with the settings! (I’m looking at you, brother!)

Also air con.  It’s super nice to keep cool when it’s stuffy and you can’t open the windows all the way.

The most important and obvious one to start with is, you are in your own environment.  Your natural habitat.  You have the whole house to roam around and of course your own bed to sleep in and your own bathroom to poop in.  You are not confined to just one room. Freedom!

The next positive is actually my personal preference for doing IVs at home.  That is I get to administer them myself.  For me, I feel like this is my biggest responsibility and I can take my time over it.  I’ve sometimes found in the past that, although the nurses are great at what they do, they can rush things a bit, probably because they are super busy all the time.  I also think that because they do IVs thousands of times, it can probably get a bit flat therefore leading to mistakes.  Now I’m not saying this is every nurse, but enough to make me want to be in control of doing them myself.  I’ve also found some can pull on the extension tube (without meaning to) or press down where the line is placed, which is usually a bit bruised.  I am also extremely paranoid about the line blocking.  If anything goes wrong then I would like to be able to say that I did everything I could to prevent it from happening.  But most of all, I want to take the burden off of the nurses. Give them one less patient to worry about!  (If I am staying in hospital, I always ask if I can get signed off on doing the IVs myself).

Although getting hospital food brought into you is great, it’s even better when you can get the food yourself at home. Mmmm home cooking! Or if anyone is looking after you, they can get it instead.  Plus a bigger fridge means more wine! 😉

Also, having your whole wardrobe, cosmetics, books, DVDs etc at home is loads better instead of just a selection.  And of course you get loads more signal at home and reliable Wi-Fi (although living in a small village that doesn’t have high speed internet isn’t much faster than hospital Wi-Fi). *sighs*

One last positive is that it’s easier for your family and friends to visit.  Because finding time to drive over an hour to see you, is a bit time consuming.  In any case, the hospital has visiting hours so what time you do have with them is rather limited.  And the best thing about being at home whilst on IVs is seeing our dog every day.  She looks after me when no one else is at home. #winning

So there we have it.  These are just the basics of the positives behind each one.  I’m sure there’s more, leave a comment below if you have any others to add, and which one out of the two you prefer.

I prefer home IVs. Some people prefer the hospital.  I found a lot of positives for hospital IVs but for me, it’s a defined difference.  The hospital is super beneficial for your health which goes without saying.  But home IVs are so much better for my mental health.  For me, being isolated in one room for two weeks takes its toll.  If I am well enough to do IVs at home then I always will.

One thought on Hospital VS Home IVS