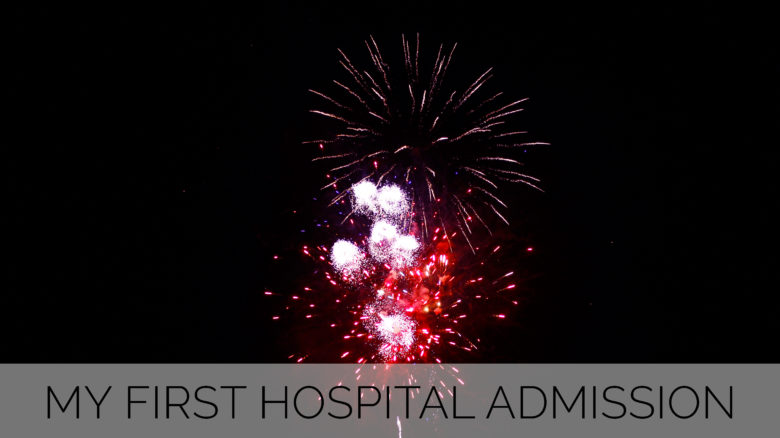 I was nine. It was December 2003, and I had fallen ill with a cold. When nothing improved, I was taken to the doctors just before Christmas and they gave me some medication. But unfortunately it didn’t work. I distinctly remember being at my Aunty Cath’s house for Christmas, and I started feeling really sick so I went and sat on the blue suede sofa with a bowl. Then I threw up. (sorry Cath!) I felt weak and tired, and I don’t think I was eating properly because I remember the lump in my throat that made it hard to swallow. It was constantly there.

Things didn’t improve after Christmas, and we finally went back to the hospital on New Years Eve. Apparently my skin had a blue tinge to it because of the lack of oxygen. The doctor took one look at me and said that I was to be admitted immediately. I think it was a huge shock to my parents because they had never experienced anything like this before. The realisation set in for them and it was the first real sign of what lengths CF can go to.

I was taken to a room attached to the paediatric ward. To be honest, I didn’t know what was happening. Until a nurse explained that they were going to put a Cannula in my arm and that it would have to stay there for two weeks. I still didn’t really understand what a ‘Cannula’ was, till I asked. When they said it was a needle that would transport antibiotics into my veins, I think it’s safe to say I freaked the eff out. Major ugly crying face!! Bursting into tears at the idea, I was told I could have some special cream which would ‘numb’ the skin (Ah the wonders of Emla cream!). I begrudgingly let them grip my arm and squeeze the cold cream onto it.

We had to wait an hour or so for it to work. I was terrified. In the meantime, Mum went home to gather some clothes and belongings for me. She met a friend on the way back and told her what had happened. Fortunately the friend offered to look after my brother, who was 12, till the next day.

I sat upright on a bed positioned in the middle of the small room I was in, Dad by my side. Then the time came, the door opened and a few nurses spilled through wheeling a metal table that was full of objects. I started shaking. My brain felt numb as though it had been plastered in the cream instead. I squeezed Dads hand in anticipation.

Maybe the nurses could see how nervous I was because they brought in some guy dressed up as something, (it was either a bear, a clown or something similar) as a distraction. He was very flamboyant and normally I’m quite polite and wouldn’t say anything, but I turned my head away and burst into tears. They soon ushered him out.

Who remembers the days of using a ‘Where’s Wally’ book as a means of ‘distraction’? I can tell you now people, it just simply doesn’t work. Or at least, not for me anyway. How could I look for him when I was being told to straighten my arm as much as possible, then to clench my fist and open and close so they could find the right vein. Even though the I had the numbing cream on, it didn’t stop the pain as much as I thought it would. I’m gonna be straight with you, it hurt. I think I gripped dads hand so tight I wouldn’t have been surprised if I’d made an indent. So to add to the fact that I was supposed to be finding Wally, Dad was making terrible jokes to try and make me laugh through my snotty tear stained face. I’m talking terrible Dad jokes!!

I don’t know how long it took before it was all over, but it felt like at least half an hour. Once it was done, the nurses congratulated me on being so brave, but I didn’t feel brave. One nurse said that she was going to start a dose straight away and the liquid might feel a bit cold in my arm.

I finally managed to get the courage to look down at my sore arm. The pain I felt at this moment was much more excruciating than any other I’d experienced that night, because the pain came from directly inside. It felt like my heart had shattered into a million pieces, a mixture of sadness, fear and dread. There was a needle in my arm, with tubes coming out attached to a machine which the nurse was now plugging in the biggest syringe I’d ever seen.

At this point mum had come back with some clothes. I felt drained. At last the antibiotics had transferred through and the nurse put my elbow in a splint, instructing me not to bend my arm. She then bandaged it up so that it was all safely hidden from view.

I was escorted out of the room and into my own. But from that moment on, that room was known as ‘the room of doom’. I was shown into my own little room away from the ward. It had two beds in so that Dad could stay the night. Dad went on the prowl for food whilst Mum stayed with me and helped get me changed, for I only had one arm to help me do everything. It sounds strange but you just don’t realise how difficult it is to do everything with one arm! Seriously!! I quickly gained the name ‘one arm bandit’.

But to end the night on a positive, Dad came back with fish and chips!! Mum had decided to leave before it struck midnight. Apparently she had a ton of messages from my brother asking if everything was okay. There was a New Years Eve party going on at the local village hall which was where him and his friends were. When Mum turned into the hall, he was waiting outside for her.

I remember eating chips when it struck midnight, and watching fireworks explode into colour from the hospital window. It wasn’t the best way to bring in the New Year, but it was necessary.

My parents took it in turns to stay over the week. And by the third or fourth day, I was feeling much better. I’d started eating again, the colour had returned to my cheeks, everything was dandy.

Until exactly a week after, when they plugged in the afternoon IV and I felt liquid dribbling down my arm. The cannula had stopped working. So I had to endure the whole thing again but in my right arm!! 😱😱

Nowadays, they use a long line which is more sustainable than a cannula and usually lasts for 14 days. Cannulas are only used for shorter periods, lasting a maximum of 7 days.

So that’s the story of my first admission to hospital. I’m aware that it’s not really a positive post, but it is a key moment in my life that many others have to go through. I know other CFers who are admitted much earlier on in their life.

I’m also very aware that without having IVs, I might not be where I am today or here at all! So the silver lining here, is it makes me eternally grateful that they work their magic so well and that I’m able to have them even though it sucks so much. Aside from the IVs, I’m so thankful to all of the Doctors and Nurses who work so hard, (especially on New Years Eve!!) You DA REAL MVPs! *mad Hi-fives *

Who else remembers there first admission for IVs? Let me know in the comments!